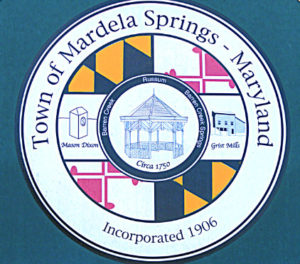 A Brief History of Mardela Springs and the Barren Creek Area

Recorded history of the Barren Creek area dates from the mid-1600s, when English fur traders drifted into  the Nanticoke River watershed to open commerce with the native Americans living there. Maryland's 1634 charter included all that part of the peninsula between the Chesapeake Bay and the ocean (Delaware River) north of Virginia. Settlers moved into the lower peninsula coming north from Virginia's eastern shore and east from Virginia's Northern Neck area across the Chesapeake Bay. When William Penn in 1682 claimed the western shore of the Delaware River, it started a controversy with Maryland that would last until a boundary line for Delaware was agreed on in the mid-1700s.

Native Americans living along the eastern shores of the Nanticoke River were part of the Nanticoke tribe, but locally known as the PUCKAMEE group. They fished, hunted, and raised crops, lived in long houses, and, except for one recorded massacre of a white family, were generally peaceful toward European settlers. From 1678 to 1698 a reservation was established by the colonial Assembly, stretching from the mouth of Barren Creek to near Riverton and inland to the present town of Mardela Springs, mirroring the Chicone group’s reservation on the river’s western shore. By the early 1700s most Puckamees had moved out of the area, going either north to Pennsylvania or east to the area around Millsboro, Delaware.

Settlement by white families was delayed until the latter 1600s, primarily due to white fur traders' desire to avoid disruption of their dealings with Indians for beaver, deer, and fox hides. Families began patenting land in this northwestern part of Wicomico County by the 1680s, however, and early families included the Wrights, Venables, Weatherlys, Roberson/Robinsons, and Wilsons, among others. Farms were largely self-sufficient, depending on ships sailing up the River and into Barren Creek for manufactured goods from Europe and sugar from Bermuda. Both indentured servants and slaves were here, but there were few large slaveowners. They raised tobacco as a cash cop, the same ships loading hogsheads of tobacco at the wharf by the warehouse on the south bank of Barren Creek. Tobacco gave way to grain farming by the latter 1700s, and by the mid-1700s hundreds of families lived in the area, and a small village began to form on the banks of the Creek, taking the name of Barren Creek Springs.

The "town with three names" grew because of four factors: the location of the tobacco warehouse, a number of water-powered grist and saw mills on the stream, the location on the major road linking county seat Princess Anne with all points north of the Nanticoke on the Eastern Shore, and the prevalence of mineral water springs. Earliest references call it Barren Creek, then Barren Creek Springs; in 1880 town leaders changed the name to Russum in honor of a local business man and resident, then back to Barren Creek Springs in 1884. Ten years later entrepreneurs in the bottled mineral water business urged another change to Mardela Springs, hoping to avoid any associations with images of a "barren" place or of water that came from “Barren Creek”.

The economic & cultural history of the region centered on farming, commerce chiefly via shipping with the "outside" work, and manufacturing in the mills - at one time more than 12 on Barren Creek alone. Vienna had become the primary river crossing in the early 1700s, and laws demanded the building and upkeep of a causeway across the marsh on the east bank, providing a road leading directly to Barren Creek Springs. From there, the main road led south to Quantico, and on to Somerset County seat, Princess Anne.  The primary road to Salisbury, (established about 1732), at that time veered off the road to Quantico, turning east and following close to the Wicomico River.

The town as a spa and tourist mecca began to evolve in the 1840s. The fame of the mineral water springs made the town a destination for national political figures and campaigns, and the Barren Creek Hotel expanded from a small inn built in the latter 1700s to a two story, then three story, hotel. Soon after the end of the Civil War a "Spring House" was built on the grounds of the hotel, near the largest spring, and guests would come to drink the "health-giving" waters and soak their feet!  By the late 1800s hundreds of visitors from Baltimore, Washington D.C., and Philadelphia and throughout the region flocked to the town every summer, promenading along the tree-shaded Main Street in the evening, boating on the Creek, taking carriage rides in the countryside, and being entertained by travelling entertainers and political rallies!

Growth in the mid-1800s  came rapidly with two developments - the coming of steamboat traffic on the Nanticoke River in the 1850s and the arrival of the railroad in 1890. Both contributed to farming's transition to commercial agriculture and the rise of manufacturing.  Along with farmers' switch from oxen power to horses and then to steam engines for such tasks as threshing, and by the early 20th century to tractors. Strawberries and melons became the new "cash crops" and by the turn of the century the appearance of canning factories added tomatoes and other vegetables to the list.

The railroad also encouraged the expansion of the sale of the mineral waters and the new Mardela Springs Mineral Water Company shipped thousands of bottles of spring water up and down the east coast.  The railroad encouraged local townspeople to open their homes to hundreds of vacationers, salesmen and travelers of all kinds by advertising their homes as "Boarding Houses." City dwellers from the Western Shore (of the Chesapeake Bay) taking the train to Ocean City, often stopped off in Mardela Springs to break the journey for a night.  Local businessmen opened grocery stores, millinery stores, blacksmith shops, and a shipyard. In the early 1900s the town was a bustling commercial center.

The first church built in town in 1842, the Barren Creek Springs Presbyterian Church, was soon joined by two Methodist churches and a Baptist Church. The first school is thought to be the private one operating in the same Presbyterian Church building in the 1840s. Free public elementary education, legislated by the state in the 1860s brought about several one room schools in the town and neighboring area, and a new combination elementary and high school was built in 1920, only to be replaced by a larger brick building in 1935.

World War One and World War Two brought major changes to the town and area. Young men were carried to far away places in this country and overseas, and were introduced to a new world in more ways than one. The introduction of the automobile meant country folk could quickly and easily travel to the growing commercial hub of Salisbury, and the construction of a major highway, U.S. Route 50, along with a bridge over Chesapeake Bay, made it easy for travelers to bypass Mardela Springs. Local stores went out of business. The railroad ceased to run locally. Farmers carried their crops to metropolitan markets by trucks.  By the 1960s the town had suddenly regressed, to become once again a small quiet village.

*credits to the Westside Historical Society for the information.